In August 2020 the necessary legal regulations were approved by Parliament to support the mandating of the fitment of digital radio in passenger vehicles in the UK. The new order, which comes into force in September 2020, is in line with the EU's EECC directive, which mandates digital radio in new cars across Europe.

In the UK, 94% of new cars sold are factory-fitted with DAB+.

2019 was a record year for DAB in new vehicles in the UK, with 2.38 million new cars and commercial vehicles hitting the road fitted with DAB digital radio as standard.

Following the launch of a consultation on behalf of the Department for Transport, in August 2020 the necessary legal regulations were approved by Parliament to support the mandating of the fitment of digital radio in passenger vehicles in the UK.

The Road Vehicles (Approval) Regulations 2020 were laid before  Parliament on 7th August 2020 and the Order comes into force on 1st September 2020.

This implements the provisions in Article 113 of EU Directive 2018/1972 (the European Electronic Communications Code (“EECC”)) covering the compulsory fitment of digital radio in passenger vehicles, meaning cars and buses (see regulation 22). The requirement comes into effect from 21 December 2020. 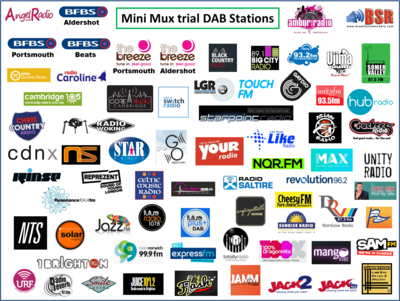 Podcast Radio has been added to DAB in Birmingham, in addition to being on-air in London, Surrey, Manchester and Glasgow. Podcast Radio CEO Gerry Edwards says: “We’ve wanted to expand to Birmingham for some time now. We’ve been waiting for space on the digital transmitter multiplex there and as soon as the opportunity arose for further expansion, we grabbed it."

Digital Radio UK has launched a new on air campaign communicating how listeners can enjoy their favourite stations with digital radio at home, on the go and in their car as the easing of restrictions sees a welcome return to more activities. The new 30 second spots will run across national and local commercial radio stations from Monday 29 March to Sunday 25 April 2021.

There are several different types of DAB radios, including tabletop (for using at home), alarm clock radios (with built-in features to help get you up in the morning), and portable radios (to take on holiday, on picnics or out to the garden).

WorldDAB and the European Broadcasting Union partnered to present “DAB+ at the heart of hybrid,” a webinar focusing on DAB+ and hybrid radio in the car. The two-hour webinar streamed live on March 10 is available for future viewing on WorldDAB’s YouTube channel.

New consumer research commissioned by Frontier Smart Technologies shows how the coronavirus shifted broadcast radio listening across the United Kingdom and how those developments could influence that country’s move toward DAB, DAB+ and IP streaming and multimedia technologies.

The station, which launched on February 14 both online and on DAB in select UK cities, reports having attracted 100,000 listeners in less than one month and has been inundated with thousands of enquiries from listeners looking to tune in on DAB in areas not yet covered. To meet this demand, from Friday morning, listeners from across the UK will be able to tune in on DAB+.