In December 2017, Norway became the first country to completely switch off national FM services, completing a year-long process of switching off region by region.

99.7% of the population has access to DAB+ reception with almost 6 million receivers sold to date.

In March 2019, a report released by WorldDAB, at the Radio Days Europe conference in Lausanne, revealed how the switchover has impacted Norway’s radio listening.

An updated version of the WorldDAB report published in August 2019 showed that total radio listening in Norway is back to similar levels as achieved in 2016, prior to the digital switchover. According to the report, younger and older listeners have recovered fastest, and overall listening levels are stable with daily reach standing at 63-64%, and weekly reach at 88%.

In Norway, 99.5% of the population has access to DAB reception. Public broadcaster NRK has 99.5% population coverage. Commercial stations have 92.8% coverage.

DAB network covers the same percentage of the population as the largest FM-network, and the commercial network reaches out to a large population. Tunnels have DAB-coverage from 2016, and all tunnels that require FM-coverage, will be equipped with DAB. All new tunnels longer than 500m will have DAB.

Contrary to FM, where only a few channels have tunnel coverage, all channels on air outside.

416 tunnels will have DAB by 2020, however most will be completed by 2017. The coverage area for DAB is equal to or better than the FM-network.

A coverage map can be found on the Digitalradio Norge website. (Enter address or choose postal zipcode and your requested channel, and the map will show the coverage of the relevant area. An orange colour indicates strong signals.)

A video showing some of the challenges of building a DAB network covering all of Norway`s challenging topography can be seen on the "Hva er digitalradio?" website.

A full listing of the services on air in Norway is available at http://radio.no/dekning/#networks. There are 23 nation-wide channels, 9 commercial and 14 public.

There are also 7 local networks in operation in Norway. In the Oslo area 18 channels are available, in addition to the national networks.

In the national and regional networks, both DAB and DAB+ are transmitted. By 2017, all stations transmit in DAB+. The local DAB-networks utilise DAB+ only.

NRK broadcasts Slideshow (SLS) on all of its stations except for the low bitrate weather station. The slideshows contain images of album covers, djs, trafic information, news bulletins, as well as images from RSS feeds, Instagram images and text, facebook images and text.

Both P4 and Bauer radio groups broadcast Slideshow on their DAB services as well.

NRK launched TPEG service 7 July 2017, transmitting over NRK's DAB network with a coverage of 99.5% of the population in Norway. Made possible by using the open traffic data made available by the Norwegian Public Roads Administration, it's transmitted as TEC with RDS TMC and/or GLR locations. OpenLR is expected to be available soon as well.

The service is completely free to air, and NRK encourages manufacturers of receivers to make use of the data when possible. For interested parties NRK has example files available for testing, both as TPEG-binary and DAB ETI files.  DAB ETI files will also be available in the WorldDAB ETI Library shortly.

NRK has 7 regional multiplexes, adding up to a nationally covering network that reach 99.5% of the population. NRK has 14 services in total, 10 of which are currently in the regional network. (4 are temporarily placed in the commercial network). 2 out of these 10 share one channel-slot, sharing the day between them. The main channel, NRK P1, and the digital-only station P1+, have localised content in each region some parts of the day. In each region there are 2 or 3 local versions of these stations (each region covers 2 or 3 counties). The other stations are similar across the country.

The commercial network has a coverage of 92.8% and contains 9 commercial services and (temporarily) 4 NRK services.

In Norway, there are 37 regions for local DAB transmissions. An overview of the regions and the frequencies used can be found here. One operator is given licence in each region, and this operator must offer DAB-capacity openly, and at equal terms to all stations. In March 2016, licences for 18 of these regions were awarded for the period of Jan 1st 2017 - December 31st, 2031.

Today, 6 local DAB networks are in operation, under a licence that will expire Dec 31st, 2016. The number of available stations is different by region. In the Oslo area there are 14 local DAB stations as of March 2016.

By November 2017 49% of all Norwegian private cars had a DAB+ radio (Digital radio survey, Kantar Media). With the announcement of FM switch off in 2017, the main in-car focus is on the market for adaptors and retro-fit digital radios, to ensure these are as widely available as possible.

The proposed strategy is to install DAB radios into as many cars as possible before the FM shutdown, making adaptors available through traditional and non-traditional car accessory sales channels. A key element in the strategy is to offer DAB adaptor installation at the same time as periodic vehicle-controls.

Before the switch off 60% of drivers who did not have DAB in the car said they would wait to upgrade when the FM network is extinguished.

When asked what they plan to do with their old FM radios, 41% of car owners without DAB said that they want to upgrade to a DAB adapter or a new radio. 11% reported that they are replacing their car before FM is extinguished. 10% want to wait until they get more knowledge about how to fix it. As many as 26% do not know or did not answer what they would do. Read more. 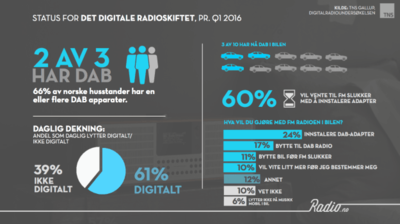 DAB sales penetration by population in Norway in 2018 was 88% by household. Sales of DAB receivers including in-car products, have been increasing steadily since their introduction into the market in 2009 when 63,000 were sold, compared to the 667,000 units sold in 2014.

Norway’s three leading broadcasters, NRK, TV2 and MTG, jointly run mobile TV services via DMB. MiniTV trials began in the Oslo area in 2009 with live TV channels, on demand content and other related services. Today 4 TV-channels are available on MiniTV. A software based solution for pay-tv, provided by Korean DigiCap, is also on trial on the DMB networks.

Key features of regulation for digital radio in Norway are:

Analogue radio switch-off is planned for 2017 as the following switchover criteria has been met:

Information to the public is co-ordinated, and partly performed, by Digitalradio Norway which is owned by public broadcaster NRK, P4 Group and Bauer Media.

have mainly used the radio as their medium. These have frequently been on air on commercial radio stations and on NRK's radio and TV-channels. Digitalradio Norway also operates www.radio.no, which includes news, DAB coverage maps, how-to articles and videos, as well  as information about the growing DAB channel selection in Norway. Digitalradio Norway also uses promoters whose role is to visit car and electronic dealers and advise on DAB and assist on any marketing activities.

To encourage commercial companies to maximise their efforts in promoting digital radio, commercial radio broadcasters offer copromotion opportunities, with on-air DAB-related campaigns which have proven to be very effective in increasing the awareness of DAB with consumers. The main focus is on ensuring availability of DAB in-car adaptors and securing a network of competent installers, and this focus is reflected in marketing and information activities.

Link to information films, broadcast on NRK and commercial TV-station. http://radio.no/digitalisering/utvider-radiotilbudet/ (in norwegian).

Myths and mistakes continue to emerge in the discussion of DAB. On this page Digitalradio Norway collected the facts.

All relevant tunnels in Norway  have DAB-coverage. Contrary to FM, where only a few channels have tunnel coverage, all channels on the outside of a tunnel will be available also on the inside.

In an emergency situation, the Road Authorities will be able to transmit messages on all DAB stations broadcast into the tunnel, from the outside of the tunnel or from the operations central.  This will effectively mean a higher security for all travellers in road tunnels, as messages will reach all radio listeners - not only those listening to a specific channel. In Norway there are approximately 260 road tunnels with broadcasting integrated today. At FM shutoff all of these will have DAB and accordingly all new tunnels longer than 500 meters with annual traffic over 5000 vehicles.

Another DAB multiplexer order in Norway

Paneda has just received another order for the local radio operator KSU24/7, located in the mid-west of Norway. The order contains the Paneda DAB multiplexer and encoders using a the dedicated Paneda 1U hardware containing multiplexer.
From Paneda:

New data published as part of WorldDAB's report on the radio industry and listening figures in Norway shows that total radio listening is back to similar levels as achieved in 2016, prior to the digital switchover. Younger and older listeners have recovered fastest, and overall listening levels are stable with daily reach standing at 63-64%, and weekly reach at 88%.
From WorldDAB:

Digital switchover – Norway listening back to pre-DSO levels, Switzerland DSO on the horizon

Norway opened the second day of the Radiodays Europe with a presentation titled: ‘Beyond FM – the new normal’, where Ole Jorgen Torvmark, who discussed Norway's successful transition to digital radio, was joined on stage by Arqiva’s Head of New Technology Simon Mason and Iso Reichsteiner, Project Manager of the DSO process in Switzerland.
From WorldDAB:
Read more...

WorldDAB has, as part of the Radio Days Europe conference in Lausanne, released a new report revealing how the switchover has impacted Norway’s radio listening. Amongst a number of key findings, the report indicates that total radio listening in 2019 is back to similar levels as achieved in 2016 before the digital switchover, and highlights that 86% of daily listeners now use DAB+, compared to only 55% in 2016.
From WorldDAB:

Digital radio in Norway bearing fruit a year after the switchover

Just over a year after becoming the first country to complete its digital switchover, Norway remains at the centre of attention. In this article, WorldDAB reports on the current state of the radio industry in Norway, based on the keynote session of the Digital Radio Summit held at the European Broadcasting Union in Geneva, Switzerland.
From WorldDAB:
Read more...

EECC directive points to DAB+ as the future of radio

The European Electronics Communication Code adopted by the EU at the end of 2018 mandates digital radio in cars by the end of 2020. While in theory, this directive could refer to DRM or HD Radio, it is assumed that this legislation refers to DAB+, the most commonly used form of digital radio in Europe. Many European countries are already operating DAB / DAB+ networks, although Norway is the only country to have entirely switched off its nation-wide FM network.
From Tu.no:
Read more...

According to the figures released in the latest survey by Nielsen, the positive development in radio listening witnessed at the end of 2018 has continued into the new year, with daily coverage up by 14.2% compared to December 2018.
From Medier 24:
Read more...

Sahaga, whose DAB+ radios are available across Europe, has announced it will continue to handle the Norwegian market following the country's digital switch over.
From sahaga.com:
Read more...

A DAB+ radio is an inclusion in the new Norwegian safety campaign: "You are part of Norway's preparedness". The brochure is by Norway's Directorate for Social Security and Preparedness, and has been launched in the event of extreme weather that could cause a loss in critical infrastructure, such as power, water and mobile networks.
From Radiobutikken:
Read more...