Following successful trials starting in 2008, a national multiplex operated by the Office National de la Télédiffusion (ONT), the national public broadcaster in Tunisia, was installed in March 2019. It is now on air, covering 75% of Tunisia’s 11 million inhabitants.

A national multiplex is operating on air by the national public broadcaster ONT covering 75% of the country’s 11.7 million inhabitants.

The multiplex, which hosts 18 DAB+ stations, covers the capital of Tunis as well as other regions in the north-eastern part and the middle of the country, including Ariana, Ben Arous, Nabeul, Sousse, Monastir, Manouba, Jendouba, Zaghouan, Bizerte, Mahdia and sfax. 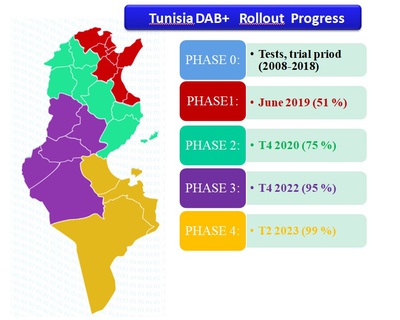 Digital Radio: the alternative to the anarchy of broadcasting in Tunisia

According to the trends identified in digital radio broadcasting globally standard (DAB+) will be the only alternative to analog after the extinction of the latter by 2020. This technique will allow all stations to radio operate within the rules of the art while respecting the legislative and technical requirements recommended by the Regional Radiocommunication Conference 2006 Geneva which will provide a free pluralistic media landscape, and diverse in the post-revolution Tunisia.