Following successful trials starting in 2008, a national multiplex operated by the Office National de la Télédiffusion (ONT), the national public broadcaster in Tunisia, was installed in March 2019. It is now on air, covering 75% of Tunisia’s 11 million inhabitants.

A national multiplex operated by the national public broadcaster ONT is now on air covering 75% of the country’s 11 million inhabitants. 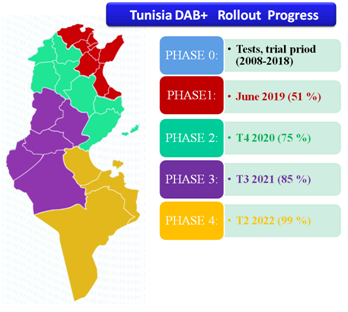 Tunis leads the way on DAB+

Stakeholders from the Tunisian radio industry and broadcast experts from across the Arab world convened in Tunis last month to discuss the opportunities DAB+ brings to the radio, manufacturing, retail and automotive sectors.

DAB+ growth not limited to Europe

DAB+ continues to expand in Europe, with significant steps being taken across the continent. However, its growth is not limited to Europe. In North Africa, Tunisia is leading by example - over half of the population now has access to DAB+, and a DAB+ workshop organised by WorldDAB and ASBU last week brought together key stakeholders from various Arab States, highlighting the interest in DAB+ in the region.

The Arab States Broadcasting Union (ASBU) is today hosting a joint workshop with WorldDAB. Held in Tunis, the workshop focuses on the current deployment of DAB+ digital radio in Tunisia and how radio, manufacturers and retailers can benefit from new business opportunities presented by DAB+.

The Arab States Broadcasting Union (ASBU) will host a joint workshop with WorldDAB on Thursday 10 October 2019. The workshop will take place at the ASBU headquarters in Tunis and will focus on the current deployment of DAB+ digital radio in Tunisia and how radio, manufacturers and retailers can benefit from new business opportunities presented by the growing DAB+ market.

The Radio and TV Festival organised as part of the 50th anniversary of the Arab States Broadcasting Union (ASBU), held in Tunis at the end of June, served as an opportunity to highlight the launch of regular DAB+ services in Tunisia, and the expansion of DAB+ in the Arab world.

In line with the increased adoption of DAB+ across the MENA region, ASBU invites operators in the broadcast industry - equipment manufacturers, service and technology providers, integrators - to exhibit at this year's event taking place in Tunis.

High-level radio executives from across the Middle East and North Africa attended the Week of Technology event last week in Tunis, to learn how new advancements can help the region embrace digital radio. Topics included the progress of digital radio via both the DAB+ and DRM standards, and the critical role for DAB+ in the context of developing 5G technology – however, it was the subject of the newly-published ETSI specifications, including significant development on non-Latin script, that delegates found most interesting.

Following on from ASBU Arab Festival for Radio and Television, the EBU's Director General Ingrid Deltenre and the Technology & Innovation department's Marcello Lombardo were part of a high level delegation hosting the EBU Radio Days 15-16 May in Tunis where DAB radio was discussed.

This week, our sister union, the Arab State Broadcasting Union (ASBU) organised a two-day symposium on Digital Radio at its headquarters in Tunis together with WorldDMB. Various speakers, from broadcasters and operators to industry, came to share their experience, best practice and deployment strategies for Digital Radio in Europe.

Digital Radio: the alternative to the anarchy of broadcasting in Tunisia

The National Office of Broadcasting (ONT), a pioneer and leading-edge operator, has invested in a pilot DAB trial since 2009, currently covering the areas of Greater Tunis, the good Cap and areas close to the governorate of Bizerte.