Swiss Ofcom officially confirmed on 29 August 2019 that FM will be switched off in Switzerland by no later than end of 2024.  The DigiMig Working Group confirimed that 65% of radio listening is now digital, 35% of which is via DAB+, and with only 17% of radio listening now exclusively via FM.

In spring 2013 the radio industry, together with the Federal Office of Communications (OFCOM), set up the “Digital Migration” working group (DigiMig WG). Within the group are representatives of the Swiss Association of Private Radio (Verband Schweizer Privatradios - VSP), the Union Romande des Radios Régionales (RRR), the union of non-commercial local radios (Unikom), the SRG SSR, OFCOM, the car industry and other industry circles.

DAB+ was also the most widely used radio distribution channel, increasing by 14 percentage points since autumn 2015 and claiming 37% of all listening.

Digital radio on DAB+ in Switzerland reaches over 99% of the population (outdoor 99%, indoor over 96%). 99% of the roads are covered, including high way tunnels.

The latest commissioning is published as news on www.broadcast.ch.

For an up to date list of services on air please visit http://www.broadcast.ch/data_program_dab.aspx

91% of new cars in Switzerland now with DAB+ as standard

OFCOM surveys show that the proportion of new vehicles in which DAB+ reception is fitted as standard rose sharply again in 2018 and is now 91%, compared with 85% in the previous year. This means that the requirement that will apply in the European Union from the end of 2020, whereby every new passenger vehicle must be DAB+-capable, has almost already been met in Switzerland.

At the end of 2019, use  of digital radio by Swiss citizens averaged 64 minutes per 100 radio minutes per day. Of this figure, 37% was accounted for by DAB+, making it the most widely used radio reception method.

Key features of regulation for digital radio in Switzerland are:

Commercial radio and media companies in the German part of Switzerland were granted 8 licences in summer 2007.  SwissMediaCast AG was granted a licence to broadcast on Channel 7D and 9A by Swiss Ofcom (the regulator). SMC AG running the first commercial DAB+ multiplex in German-speaking Switzerland. On 13 May 2019 the Swiss regulatory and licensing body ComCom granted another licence for broadcasting DAB+ services in French-speaking Switzerland to DABCOM AG (IP worldcom / DIGRIS).

From 2020, regional radio stations which cover conurbations should benefit from greater autonomy by no longer being subject to a licensing system including a performance mandate. This proposal is included in the revised Radio and Television Ordinance (RTVO) which the Department of the Environment, Transport, Energy and Communications (DETEC) is putting out for consultation from 16 February 2017. The new text, which deals with radio broadcasting, also paves the way for the transition from FM to DAB+.

Marketing activities to support DAB+ in Switzerland began in 2006.

The Federal Office of Communications (OFCOM) issued an invitation to tender for a four-year DAB+ information campaign beginning in 2019 in order for the population to be able to prepare for the migration of the broadcasting of radio programme services from FM to DAB+ in good time. In this way the Federal Office is supporting the radio industry, which will increasingly broadcast programme services digitally via DAB+ networks and switch off its FM stations in a few years.

On World Radio Day 2017, OFCOM launched a promotional campaign to "support the transition to the new DAB+ digital broadcasting standard". The campaign highlights how 54% of listeners in Switzerland now listen to digital radio. The advertising agency Republica AG was awarded the campaign.

World Radio Day, February 13, 2017, marked the start of the preliminary phase of the quadrilingual campaign which will move the radio in an emblematic way to move from the analogous standard to the digital standard. Entitled "La radio déménage", the campaign will feature the first radio spots on many radio programmes.

The new DAB+ website www.dabplus.ch and various social media channels have been active online since early February 2017. The main objectives of the promotional campaign are to increase the awareness of DAB+, increase its use and promote the sale of DAB+ compatible devices. The campaign will be funded by the Federal Office of Communications (OFCOM). The budget of 4 million francs is financed in accordance with the Federal Law on Radio and Television (LRTV) by the quotas of the fee which have not been distributed in recent years to the organisers of regional or local programs. 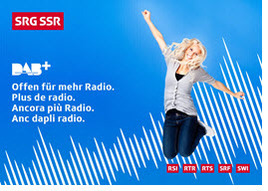 The SSR offers DAB+ brochures and exhibitors free of charge to specialised dealers.

It is possible to order the quantity of brochures here. Promotion is valid until stocks are exhausted. Delivery takes place from the beginning of December 2017.

DAB+ at the Swiss Music Awards

DAB+ was present as a partner of the Swiss Music Awards in Zurich. A photo operation drew attention to this new digital broadcasting standard. The musicians will also be the ambassadors since they will show that their music also moves on DAB+. In addition, the first content of the campaign will be shared via social media and with hashtags #DABplus and # LaRadioDemenage.

Switzerland:  national marketing campaign to promote DAB+
To support the transition to DAB+, the Federal Office of Communications (OFCOM) launched an information campaign. It issued a public invitation to tender to appoint an agency to set up such a campaign at the national level. Aims of the campaign are to raise awareness, encourage listening and increase the number of radio stations broadcast via DAB+ in households and in vehicles. The campaign will run throughout 2017 and 2018, with a budget of 4 million francs for the two years.  The award decision was in November 2016 and the campaign began in early 2017. 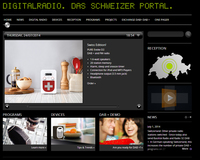 The successful ‘Digital radio. Better radio. With DAB+’ campaign was continued in 2013. The campaign included TV ads, radio set promotions, online promotion and the use of social media. The multi-platform campaign which was a first of its kind in Switzerland, ran on television, radio, posters, digitally (website, banners and as interstitial ads on smartphones), as well as on Facebook and YouTube social media. A broad range of activities on the part of private and public radio stations alike supported the innovative campaign.

This campaign was followed by transmedia campaign ‘DAB+ Jack Parker’.

Switzerland is also a pioneer in DAB/DAB+ tunnel rebroadcast systems. There are currently eight tunnels equipped and the plan is to cover up to 200 tunnels using 100 head ends and 1,000 transmitting sites. Emergency voice break-in, signal levels, system design and interfaces are also going to be specified.

The emergency alerting system in Switzerland for disasters today primarily relies on sirens (for “wake-up”) and Swiss Radio (for delivering the information). Swiss Radio currently broadcasts via VHF as well as via DAB+. Information can also be displayed on TV on banners and teletext, although this was only used once so far. In addition to this, cantons and municipalities are free to add their own channels for their official information (e.g., Twitter or Facebook).

In the next years, additional channels will be added. As of 2018, emergency alerts, warnings and information will also be published via the smartphone App “Alertswiss”, and the Website www.alertswiss.ch . As of 2019, further channels shall be added.

Regarding DAB+ in particular, the Federal Office for Civil Protection (FOCP) has undertaken different technical assessments and studies. Swiss Post, in collaboration with FOCP, has developed and successfully tested a prototype of a smart letterbox display that can show governmental information in case of an emergency. This information can be transmitted via DAB+. See also: https://youtu.be/kfTu4C7G3-Y

According to the latest data revealed by Ofcom, today, 68 percent of all radio listening in Switzerland takes place on digital radio. Claiming 37% of total listening, DAB+ now leads the way as the country's most used radio platform.

DAB+ progress in the spotlight at Digital Radio Summit

The European Broadcasting Union's Digital Radio Summit helped highlight some of the progress of DAB+ in Europe - in the UK, 95% of cars are now equipped with DAB, while in Germany, there are now more DAB radios being sold than FM, and a second national multiplex with commercial stations is set to launch in September. Digris has been licensed by Ofcom for the installation of local DAB+ networks in Switzerland as the country prepares for the switch off of its FM services.

At the end of 2019, all tunnels over 300 meters long located across major national roads in Switzerland - approximately 200 tunnels in total - were equipped with DAB+ reception signals.

The FM transmitter serving the municipality of Les Brenets, in Switzerland's Neuchatel, is set to be replaced with a DAB+ transmitter in January 2020 as Switzerland continues to digitisation.

The business opportunities associated with the growth of DAB+ in cars were brought to light during the first automotive workshop organised by SRG, the Swiss broadcasting association, on 26 September. SRG's next workshop on DAB+ in the car will be taking place in Lausanne on 3 October, as Switzerland prepares for the switch off of the FM.

Switzerland on track to switch off FM radio by 2024

The Swiss radio industry is planning to gradually phase out analogue radio broadcasting via FM by the end of 2024 at the latest, and instead using DAB+ as its main broadcasting technology. FM radio licenses expiring in December 2019 will be extended until 2024, with the possibility of shortening the duration if the radio industry so desires. According to the studies available to OFCOM at the end of June 2019, only 17 percent used FM exclusively.

Radio programs will be available via FM until the end of 2024 at the latest.