The migration of radio audiences to digital is well underway with DAB+ in the lead.

The latest figures from the Ipsos / maRadio.be survey carried out at the end of 2020 are clear: awareness and consumption of DAB+ is soaring.

8 out of 10 French-speaking listeners now know what DAB+ is, and 1 in 5 chooses DAB+ to listen to the radio. Digital platforms now represent a third of the listening volume in the region, DAB+ is the leading digital platform for the first time, while listening on FM is down by 18%.

The results of the 3rd wave of the Ipsos / maRadio.be study on the evolution of radio listening and its broadcasting platforms in French-speaking Belgium were presented this Thursday 11 February 2021 at the Digital Radio Day, a live virtual event organised by maRadio.be. 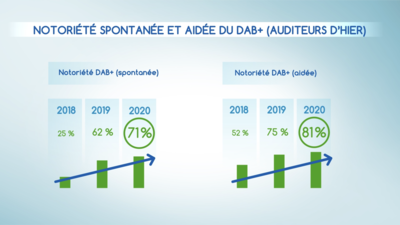 The results reveal a significant breakthrough in the digital consumption of radio, and in particular of DAB+ which is rapidly establishing itself among listeners as the successor to FM.

DAB+ is a technology that is now well-known to the majority of listeners, thanks to the advertising campaigns organised by maRadio.be and the efforts of private and public radio stations to inform their listeners – a significant accomplishment given that DAB+ was launched by public broadcaster RTBF and private networks only 15 months ago (4 November 2019).

The IPSOS study shows that by the end of 2020, 71% of Belgian listeners had already heard of DAB+, up from 25% on a previous study. The percentage of the French-speaking population that has switched to listening to the radio via digital technology is now 51%. For the first time, more than half of French speakers have listened to the radio on at least one of the three digital platforms (DAB+, internet and television), a clear increase driven by the internet and especially by DAB+.

The percentage of the Belgian French-speaking population that uses DAB+ increased from 4% in 2018 to 20% in 2020. One in 5 French speakers now chooses DAB+ to listen to the radio. Looking at listening volume on each distribution platform (by combining the number of listeners on each platform and their listening time on it), we see that the share of FM is declining (80% two years ago, falling to 66% today) in favour of listening on digital platforms, which has increased from 17% in 2018 to 34% in 2020.

It is DAB+ that best compensates for the decline in listening on FM, with audience share increasing from 2% to 14%. So for the first time, DAB+ has become the most listened to digital platform for listening, with internet listening at 13% listening volume share (also increasing, but much slower than DAB+) and television digital 7% (relatively stable).

The share of the radio audience achieved on digital platforms will therefore exceed 50% by the end of 2021. The digital migration is therefore well underway, mainly with the benefit of DAB+.

In cars, DAB+ is now fitted as standard: the total of DAB+ radios available in new vehicles amounts to 93% compared to 89% in 2019 (source: Jato Dynamics). This figure will quickly reach 100%.