In August 2022, the Italian communications regulator, AGCOM, approved the provisional national plan for the allocation of frequencies in the VHF-III band for DAB+ (PNAF-DAB).

- 54 local networks with regional coverage, of which 27 can be broken down into sub-regions;

AGCOM noted: "This plan is classified as provisional as it remains formally open, under the coordination of the MISE [Ministry of Economic Development] an international negotiating table for the planning of frequencies along the Adriatic basin..."

Digital radio required in all receivers from January 2020

The Italian Government has committed to a road map for DAB+ development, a key part of this will be a plan for coordinated frequency planning.

In September 2019, Italy's Minister of Economic Development Stefano Patuanelli expressed his commitment to DAB+ and the radio industry's transition to digital radio, highlighting his plan to increase the number of DAB+ frequencies available.

The combined coverage of the regular and trial broadcasts is estimated to be around 86% of the Italian population (i .e. people in reach of DAB+ transmissions for outdoor coverage).

Services on Air in Italy

At the end of 2018, across South Tyrol 13 transmission sites in FM were turned off.

22 programmes can still be listened to on FM  through distant locations, even if with a slight quality reduction.

RAS will no longer be investing in FM due to the high cost associated with it:

RaiWay's 18 transmission sites account for coverage of 43% of the population (Rome, Aosta, Turin, Milan, Trento, Bolzano, Venice, Bologna, Naples, Oristano, and Palermo). €6m was allocated for extension of coverage with the activation of 60 new transmission sites by the end of 2015. In August 2014, Rai launched three new digital programs on DAB+: Webradio Radio Rai WR6, WR7, WR8. These 3 programs were added to the 7 already on-air: RAI 1, RAI-2, RAI-3, FD4, FD5, Isoradio and GRparlamento. RAI has a local multiplex (4 sites) for Trentino including the local versions of Radio Uno, Radio Due and RAI Südtirol. So 14 sites transmit the Italian-wide DAB version, and 4 the local TAA mux (= in total 18). 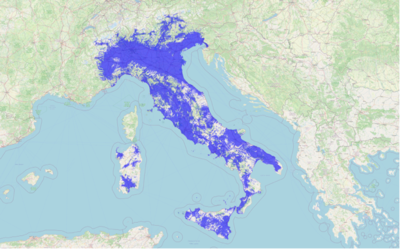 RAS approved the installation (March 2013) of a further 13 transmitters during 2014 and 2015. RAS currently has 28 transmitter sites in Alto-Adige and 2 in Trentino in operation.

The consortium of local radio stations in Bolzano won the award by the Ministry of Block 10C in Band III and may switch to DAB+ in areas already covered such as Bolzano and cover with 6 new plants the whole province: Penegal (city of Bolzano), Val Venosta, Mutta (area of Merano) Plosehütte (Brixen) Freienfeld (area of Vipiteno) and Plan de Corones, reaching more than 80% of the population.

Vatican Radio – Rome Area – began services in July 2007 on frequency block 7B and is broadcast by Castel Gandolfo and S.M.Di Galeria Services.

Further information on local multiplexes on air in Italy is available at https://digitalradio.it/operatori-locali/.

Test of services on air in Italy

In Italy, there are three regular national (2 commercial and one public) and 39 regular local multiplexes on air. In total there are 51 DAB+ national stations total, 20 simulcast on FM and 31 DAB+ stations available exclusively on DAB+, plus nearly 400 local stations simulcast on FM. All of them (national and local) are data services. In addition, 2 TPEG networks are on air, provided by InfoBlu (EuroDAB Italia and RaiWay multiplexes).

20 of the national stations are simulcasts of FM stations and 31 are stations available exclusively on DAB+.

In Italy, 100% of new cars sold are factory-fitted with DAB+.

Italy was the first country to introduce regulation mandating all new receivers (consumer and automotive) to include DAB+ from January 2020.

New vehicles produced before January 2020, which were not factory-fitted with a DAB+ receiver could only be sold up to 21 December 2020.

An Official announcement has been published in Italian law requiring all radio receivers to have digital capability from 1 Jan 2020: http://www.gazzettaufficiale.it/eli/id/2017/12/29/17G00222/sg.

For more information on this legislation see the WorldDAB EECC Factsheet.

Several trials have taken place in Italy over recent years.

Key features of regulation for digital radio in Italy:

The Ministry of Economic Development has started the procedure to assign the frequency blocks for local and national (commercial and public) digital radio services for the regions of Valle D’Aosta and Umbria, for Torino and Cuneo provinces, in Piedmont. This procedure closed on 20 June 2015 (www.digitalradio.it/blog/la-digitalradio-corre-veloce/).

In 2009 AGCOM (Italian Communications Authority) approved regulation which set out steps for the roll out of digital radio across Italy. Broadcasters can opt for DAB, DAB+ or DMB and the regulation allows for the migration of services from analogue to digital. It provides clear regulation on coverage, networks for national services, spectrum allocation for services, local coverage and rules on simulcasting and new content.

The regulation specified one national network for the public broadcaster RAI, and two national networks for commercial radio. Space was made available for local radio stations and the network operator was given additional capacity to provide data services.

Licences are issued initially to existing FM licence holders, with remaining spectrum available for new entrants. Each radio station has the right to use 72 CUs of a multiplex for its programmes. The licence period for content providers is 12 years and for network operators is 20 years.

FM Switch off in South Tyrol

In the Italian region of South Tyrol, network operator RAS started switching off FM services in December 2017. Since 2008 RAS has been transmitting digital radio stations in both DAB and DAB+ standards. Now, 20 years after the birth of digital radio transmission, RAS will completely switch to the transmission in DAB+. This switchover is due to government requirement. At this time RAS is transmitting 13 digital radio stations accoording to DAB+ and another nine stations using the older DAB standard (RAI Südtirol, Bayern 3, BR Klassik, B5 aktuell, Ö1, ORF Radio Tirol, Ö3, FM4, Swiss Jazz). Those 9 stations from january 31st on will be sent according to DAB+ only.

Heavyweight industry-funded marketing campaigns across a variety of media platforms to promote digital radio have been running in Italy since 2013. Radio campaigns promote DAB+ digital radio across all national and local commercial FM networks. National broadcasters do cross-promotion of digital radio via www.digitalradio.it and daily and periodical press as well as social media channels including facebook, twitter and soundcloud.

2014: I discover digitalradio
2015: I learn digital radio
2016: I use digital radio…and you?
2017/2018: discover the magic of digital radio DAB+ in your car! DIBIDIDOBIDI DAB!
2019/2020: focused on letting drivers know that from 2020 onwards all new cars are sold equipped with DAB+ as standard
2021: three original rap songs that highlight the advantages of DAB+ digital radio 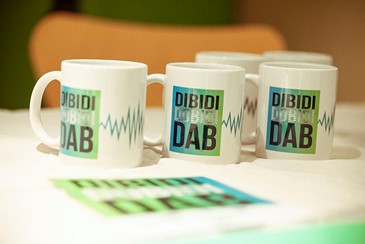 Offers and Promotions in the automotive sector

New switch-on in Terni. From the Miranda transmitter site, the TRL Media mux on channel 10D was switched on. The stations present on it are: Radio Leo, Radio Hit FM, Radio Stand By, Radio Easy & Italy, Radio Yes, Radio Tua, Stereocittà and Radio Cafè. Soon TRL Media will also arrive in Viterbo and its province.

"It has been decided with the Ministry of Economic Development to proceed with the switch-off of the medium-wave network, in conjunction with the forthcoming assignment of the new DAB frequencies, which will allow Rai to extend the reception of the new digital radio throughout Italy". This was stated on Wednesday 14 September by Stefano Ciccotti, Rai's Chief Technology Officer, during the presentation of Rai Radio's 2022 - 2023 programme schedules.

RAI shuts down medium-wave radio: 'Polluting repeaters, they consumed a lot of energy'

From 11 September 2022, the public service leaves AM. Viale Mazzini [RAI headquarters] will close the last 12 installations that broadcast this type of signal (in AM). The kilowatt power used on these antennas was high (100kW in Pisa Coltano and 50kW in Turin Volpiano, for example). And the power plants that fed the antennas were inefficient. Closing the plants and power stations would result in savings of hundreds of thousands of euros every year. Paying the electricity bill was Rai Way, the RAI company that owned the antennas.

News on the digital airwaves in Campania. Radio Kemonia and Radio Mivida - broadcasters of publisher Claudio Rocca, created in synergy with their respective station managers Salvatore Esposito and Ugo Lombardi - have extended their DAB+ coverage. After Naples and Caserta, the two stations can now also be received in the provinces of Avellino, Benevento and Salerno. Radio Kemonia and Radio Mivida are part of the CreaDAB mux.

Is it time to save Energy and CO2 emissions?

Giorgio Guana: The cost of broadcasting FM content is becoming more expensive for broadcasters every day. The cost of energy was already expected to rise across Europe, (for several reasons according to S&P Global Ratings' The Forecast for Europe and Italy, €/MWh) but this increase has become even more real after Russia unexpectedly invaded Ukraine. Broadcasters should now start considering whether to turn off some of their FM transmitters already, especially in areas already well covered by DAB+ signals.

In Genoa, the new LiguriaDab (channel 10A) and MediaDab (channel 10B) signals were activated. The latter still has no emissions but only a Test, while LiguriaDab is already regularly operational. On the mux, you can listen to Radio Babboleo Suono, Mythology '70 -'80, Radio Beckwith Evangelica, Radio Canelli, Radio Vallebelbo, Radio Mater, Radio Bruno, Radio Zainet, Radio Aldebaran, Tele Radio Pace.

Sergio Natucci, DAB Italia: Radio as always comes last, but never too late. Now the implementation phase opens: we will not accept delaying attempts of any kind and they can come from nowhere. MISE [Ministry of Economic Development] still has time to improve our heritage of VHF frequencies for DAB. After the concession, everyone must, with seriousness and professionalism, build their networks in full compliance with the rules contained in the Plan. The DAB Plan must escape bureaucratic traps: if we realise that the road map is jammed, we will turn to the government in its entirety and to Parliament.

Italian communications regulator AGCOM has published Resolution no. 286/2022 / CONS relating to the new national frequency allocation plan for the DAB+ sound broadcasting service. DAB Italia said: "It is a great achievement that definitively stabilises the digital radio system. The Plan provides for three national multiplexes of equal service coverage with large isofrequency areas. For local services, at least three layers are envisaged in each region, reaching up to seven in some relevant areas. Following the publication of the resolution on the AGCOM website, DAB Italia will begin the application phase of the rules of the DAB+ plan."