DAB+ is winning over more and more listeners. 33.5 percent of Germans - over 2.1 million more people than in the previous year - have access to DAB+ radio reception. They live in one of the now 12.6 million households equipped with at least one digital radio, according to the new study "Audio Trends 2022 Digitalisation Report of the Media Authorities". The number of DAB+ devices at home and in the car is now around 23.8 million, which is around 2.2 million devices more than in the previous year.

What about the radio button in the car?

Are audio systems and voice assistants in car user interfaces within the meaning of the State Media Treaty? This question is the subject of a legal opinion commissioned by the Media Authority of North Rhine-Westphalia. On 23 November 2022, the expert opinion by Prof. Dr. Ralf Müller-Terpitz entitled "Rechtliche Einordnung von Audiosystemen und Sprachassistenten mit dem Fokus Auto" (Legal classification of audio systems and voice assistants with a focus on cars) was published and can now be downloaded from the Authority's website. 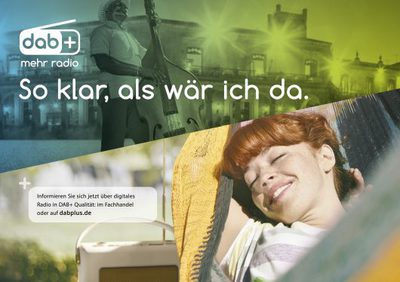 Femotion Radio launches on the regional DAB+ multiplex in Bremen

Frequencies and locations for private DAB+ mux in Schleswig-Holstein

According to the Federal Network Agency's weekly listing, DAB+ capacities for Schleswig-Holstein were put into coordination last week. These indicate the upcoming transmitter network of the regionalisable, state-wide DAB+ private radio multiplex. In August, the Media Council of the Media Authority Hamburg/Schleswig-Holstein (MA HSH) had allocated the transmission capacities put out to tender to Media Broadcast GmbH as operator of the platform.

Sunshine Live is apparently planning the same path as Klassik Radio and Rock Antenne before it: the private station for electronic music wants to expand into Switzerland. Via DAB+, 2.5 million people are to be reached terrestrially. The station initially wants to broadcast its well-known German programme - with news and advertising for Switzerland.

While the company Divicon Media will operate the regional and local multiplexes from spring 2023, Media Broadcast is expected to become the network operator of the state-wide, private DAB+ network in Saxony. This emerges from the tender for remaining capacities which has now been published. The Saxon State Media Authority (SLM) has put out to tender 228 capacity units (CU) for up to three additional radio programmes in the state-wide bouquet. Interested radio broadcasters can still apply until 17 November.

Leading cross-auditory audio marketer RMS presents its new offer for customers and agencies in Germany's 2023 advertising market. The flagship for high-coverage national radio campaigns, the RMS SUPER KOMBI, is growing by 13 new stations. The largest offer is the DAB+ Deutschlandkombi, which goes into RMS marketing in a new composition with nine stations. Olaf Hopp, CEO NRJ GERMANY: "We are very pleased that we have been there from the start with our program NOSTALGIE, which is distributed nationwide via DAB+. DAB+ has established itself as a complementary radio transmission standard and DAB+ advertising combinations are only the logical consequence. The increasing relevance of DAB+ for both listeners and broadcasters is now logically expressed in the founding of this combination.”

37 years after the launch of Germany's first private radio station, Munich's most listened to radio station Gong 96.3 will soon be launching a second service. From 1 December, the station "089Kult" will be at the top of the station list on DAB+. With the new station, the Bavarian capital is getting a new service which, in addition to "cult hits" and current information and topics from Munich, will be devoted especially to culture.

This year, Medientage München returns to the big stage at the ICM. From 18 - 20 October, visitors can expect a three-day conference programme with current and relevant topics on five stages with more than 400 speakers, a varied expo, numerous networking opportunities and entertaining entertainment formats. Bayern Digital Radio will be on site as an exhibitor and will present the test network 10D with the topics SPI (Service and Programme Information), EWF (Emergency Warning Functionality) and TPEG-EAW (Transport Protocol Experts Group-Emergency Alerts and Warnings).

DAB+ in autumn: new campaign for DAB+ in Germany

From 14 November to 4 December, DAB+ will be the focus of marketing by the members of the Digital Radio Association Germany: for three weeks, ARD, Deutschlandradio, private programme providers, manufacturers and other members will provide cross-media information on the digital radio standard and its many advantages. The campaign period also marks the launch of a new cross-media communication campaign. The campaign claim "If you want to feel, you have to hear". sums up what it's all about: the emotional value of radio as a medium and unforgettable listening moments. The plus of the DAB+ logo plays an important visual role in the campaign elements and illustrates the "more" in programme variety, listening pleasure and quality. Keywords such as "passion+", "moments+" or "home+" reinforce the emotional message.

Transmission capacities for Saxony-wide DAB+ multiplex put out to tender

At its meeting on 4 October 2022, the Medienrat der Sächsischen Landesmedienanstalt (SLM) decided on the invitation to tender for transmission capacities for use by private broadcasters for digital terrestrial radio programmes and telemedia for the Saxony-wide DAB+ multiplex. This concerns transmission capacities of up to 228 capacity units of a DAB+ coverage for the Free State of Saxony, which had not yet been awarded in the first tender procedure.

As of 4 October, the first DAB+ Bundesmux is broadcasting on channel 5C from the Schleswig-Holstein location of Hennstedt in the district of Steinburg, the transmitter network operator Media Broadcast announced on Twitter. The telecommunications tower is located between Itzehoe and Neumünster.