In July 2018, the Bulgarian Communications Regulation Commission (CRC) announced it will work with the country’s Council for Electronic Media (CEM) to form an official policy document concerning the adoption of DAB+ and launched a public consultation procedure on the draft CRC position regarding issuing DAB+ licences to broadcasters in the country.

At the end of 2018 a draft Regulatory Policy for the Administration of radio frequency spectrum was published for public consultation. The draft policy provides for the establishment of a working party to draft an official document reflecting the national policy regarding digital radio broadcasting. This working party shall include representatives from the two main Bulgarian regulatory bodies – the Council for Electronic Media (the authority that issues licenses for the production of radio and TV programs which are broadcast terrestrially and monitors the content of all Bulgarian radio and TV programs) and the Communications Regulation Commission (issuing permissions for the use of specified radio spectrum and monitoring its use).  Read more here.

ET DIP TRADING has been awarded a trial license by the Communications Regulation Commission (CRC) to transmit DAB/DAB+ digital radio in the territory of Sofia. More information (see licensing protocol 17 and decision number 5 inside the document). 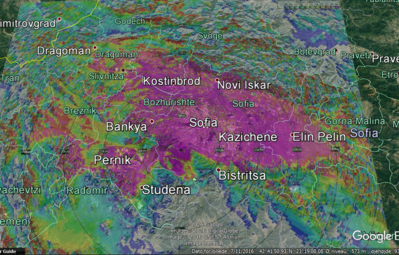 Over 450 different devices in various price ranges from 20 Bulgarian lev are available in specialised shops and commercial chains.

At the end of 2018 a draft Regulatory Policy for the Administration of radio frequency spectrum was published for public consultation.  According to the draft Policy the Communications Regulation Commission has the capacity to issue DAB+ licences however as yet no licences have been issued.

Bulgaria's Communications Regulation Commission (CRС) has launched a public consultation procedure on the draft CRC position regarding issuing DAB+ licences to broadcasters in the country.
From Telecompaper:
Read more...

Bulgaria's Communications Regulation Commission (CRС) has launched a public consultation procedure on the draft CRC position regarding the issuance of DAB+ licences.
From Novinite.com:
Read more...

The Bulgarian Communications Regulation Commission has announced it will work with the country’s Council for Electronic Media (CEM) to form an official policy document concerning the adoption of DAB+ digital radio. This is to address ongoing requests by Bulgarian broadcasters for the authorisation of DAB+ to meet additional spectrum demands.
From Bulgaria Communications Regulation Commission:
Read more...

Opel Insignia - a debut for the next generation of infotainment systems

Whether it's connectivity through traditional methods and technologies such as Bluetooth and USB, or the latest smartphone integration capabilities through Apple CarPlay and Android Auto, Insignia's new infotainment systems deepen the leading position of the Opel brand in the area of ​​communication connectivity and vehicle infotainment. In addition to the AM/FM radio set, the systems also offer the highest sound quality through the reception of DAB+ radios and the ability to simultaneously pair up to two smartphones.
From Sportal:
Read more...

On May 1st BORT (Bulgarian Operators Radio and Television) and ET DIP Trading launched a DAB+ trial multiplex which will last for six months. The transmitter will cover the capital Sofia and surrounding area. The multiplex will contain 16 radio stations not currently available on analogue.
From BORT:
Read more...

The switchover was completed when many of Norway’s most remote regions had their digital signals switched on, allowing the government to order that the traditional signal must be switched off. Even the Svalbard archipelago in the Arctic has now been moved over to DAB.
From Novinite.com:
Read more...

DAB+ will be making its way to Bulgaria, as EF DIP Treiding has been awarded a trial license to transmit DAB+ digital radio in the territory of Sofia. The license was issued by the Communications Regulation Commission.
From Radio World:
Read more...

The Council for Electronic Media (CEM) together with the Communications Regulation Commission (CRC) held consultations with representatives of the Bulgarian National Radio (BNR), the Association of Bulgarian Broadcasters (ABRO) and FOCUS Radio in March 2017. The attitudes for future digital broadcasting in Bulgaria were discussed during the meeting.
From Council for Electronic Media (CEM):
Read more...

Deutschlandfunk and Deutschlandradio Kultur to launch on DAB+

The German national public broadcasters Deutschlandfunk and Deutschlandradio Kultur will disappear from longwave at the end of 2016. The money saved will be invested in digital terrestrial radio (DAB+).
From Bulgarian DX blog:
Read more...