The WorldDAB General Assembly will take place 3 - 4 November in central London, bringing together experts and stakeholders from the international digital radio broadcasting industry.

The event will feature presentations covering all aspects of the continued growth of DAB/DAB+ digital radio across Europe, Asia Pacific and beyond. This event offers a unique opportunity to learn about the latest developments, discuss current issues and gain a better understanding of the market.

Delegates also have opportunity to network and arrange meetings as well as explore the exhibition area where organisations across the broadcasting industry will be showcasing their products and services.

The General Assembly will be held at the Cavendish Conference Centre, a modern, purpose built meeting venue located in the heart of Central London and near to BBC Broadcasting House.

A few minutes walk from Oxford Circus station. This venue has been designed and built with state-of-the-art audio visual equipment and bright, spacious and modern facilities. Delegates will also receive free Wi-Fi and refreshments throughout the duration of the event.

International Digital Radio Symposium - A vision for the future of radio

The General Assembly takes place during a busy conference season in London.  We strongly advise you plan your travel and accommodation as early as possible.

There are a number of hotels near and around the General Assembly's location.  Below are two recommendations:

Located in the West End, St Giles Hotel is near Tottenham Court Road Station, and both Covent Garden and Oxford Street shops.

The hotel is a 20 minute walk or a 10 minute underground journey to the General Assembly venue.

The hotel is a 20 minute walk or a 15 minute journey by public transport to the General Assembly venue.

This year WorldDAB will host networking drinks and the dinner at The Hallam, a Grade II listed building located in Marylebone.

The dinner provides an opportunity for event attendees to meet and network in a relaxed and informal environment.

Gala dinner now full Due to the popularity of this dinner, all places for this event are now taken. 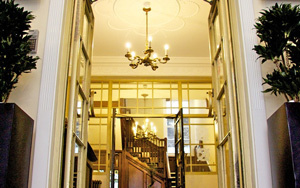 Delegates are offered the opportunity to tour the BBC Broadcasting House in Portland Place, London.  On a tour some of the things you're likely to experience include a camera's eye view via their big screen into some of the studios broadcasting to the nation, including television and radio news studios, as well as hearing about the rich history of the building and the BBC.

PLACES FOR THIS TOUR ARE NOW GONE

The WorldDAB General Assembly provides an ideal opportunity to communicate with a target audience and reach key decision makers.

A range of tailor-made sponsorship and exhibition packages have been designed specifically for you to optimise your company's exposure to a target audience.

Nominations are open for the WorldDMB Award for Outstanding Service which is presented annually by the WorldDMB President at the Annual General Assembly. Please send nominations to the Project Office no later than Friday 2 October 2015.

This Award is given to a member of WorldDMB (individual) who is renowned for his or her exceptional efforts in carrying out the promotion and roll-out of the DAB family of standards. It is offered in memory of Per Erik Selemark of Swedish radio, past Vice-President and Chair of the Technical Committee, who died in January 1999.

Report from the WorldDAB Steering Board, Patrick Hannon, WorldDAB

Register for the WorldDAB General Assembly 2015

WorldDAB members are welcome to register up to 2 free delegates for the conference. If more than two delegates are required to represent your organisation, or if your organisation is not a member of WorldDAB the following fees will be applied:

If a fee applies, you will be sent an invoice for this amount shortly after filling in the registration form below.

Please note that the gala dinner taking place on 3rd November is now full and registration for this part of the event has been closed.