Test broadcasting of DAB+ digital radio in Croatia started in November 2017 in the presence of the Prime Minister's Envoy, Minister Oleg Butković.

In November 2019, network operator (OIV) and collaborating regulatory agencies decided to continue the existing DAB+ broadcast trial for a third year running. Some of the existing services on the trial were switched, and it was announced that public broadcaster HRT had joined the trial. It was also decided that the network will be extended from current five to eight sites.

Since March 2020, population coverage in Croatia stands at 88%.

Following a network expansion that took place in March 2020, population coverage in Croatia now stands at approximately 88%, and 53% for indoor reception. 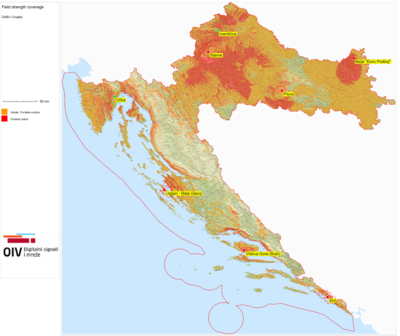 The trial is starting with the same bitrate for all audio services, 72kbps. All services are using 3A protection. The parameters are subject to change since this is a trial.
No separate data services at this moment. Just DLS; text and logo of each station.
OIV is negotiating with some of the broadcasters to put in SLS service, but it’s not in yet.
The ensemble ID is C201 (C for Croatia, 2 for regional coverage, 01 as first MUX in this area).

A network extension was realised in March 2020. As part of the extension, the following sites went into operation:

Coverage now stands at around 88% for outdoor and around 53% of population for indoor reception.

In November 2019, network operator (OIV) and collaborating regulatory agencies decided to continue the existing DAB+ broadcast trial for a third year running. Some of the existing services on the trial were switched, and it was announced that public broadcaster HRT had joining the trial. The network was also extended from five to eight sites.

This network extension was realised in March 2020.

Croatia's Electronic Media Agency (AEM) has announced the 16 radio stations that will start broadcasting over DAB+. This follows a call for expression of interest to all registered radio broadcasters.

Croatia will start a one-year DAB+ test at the end of November. The Medienanstalt has now published the list of the 16 private radio stations that will participate in it. A selection decision had to be taken as a total of 25 applications had been received, but only 16 were available.

Call for expression of interest for DAB+ licences

Electronic Media Council has opened a public call for expression of interest for programme licences in DAB+ technology for western part of Croatia, for a trial period of one year.

HAKOM and AEM join together to present the benefits of DAB+

The Croatian Regulatory Authority for Network Industries (HAKOM) and the Agency for Electronic Media (AEM) joined together to hold a meeting focused on presenting DAB+ technology to representatives from the broadcasting industry and Ministry of Culture and ways in which DAB+ can provide benefits for to both the listener and broadcaster.

More rational use of the frequency band allows for developing television via mobile phone. &quot;We will see what the communications service providers are going ...