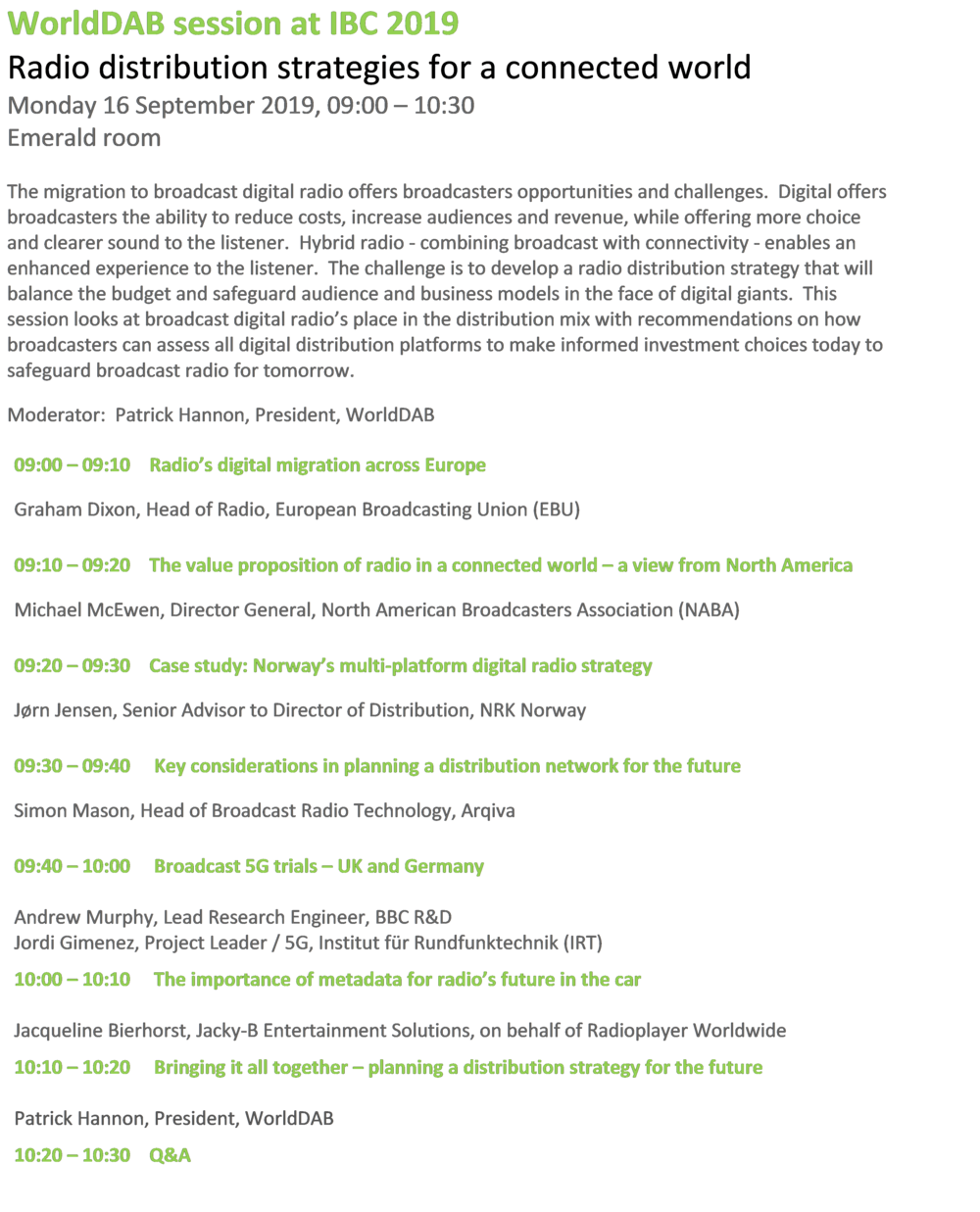 This event is free to attend for attendees of the IBC exhibition -  register here using WorldDAB's customer code: 13741. 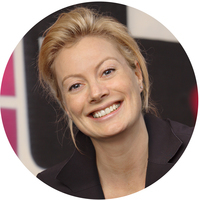 Jacqueline Bierhorst has been a pioneer in commercial radio since 1987, specialised in distribution, marketing and content. She has a strong track record in launching and leading successful commercial television and radio channels in The Netherlands and Belgium. From 2011 till 2015 she was project leader on the rollout of the DAB+ network in The Netherlands for all commercial broadcasters, launched on 1 September, 2013. Since 2015 she has been Project Director of Digital Radio NL, a collaboration between public and commercial broadcasters and the Dutch Ministry of Economic Affairs and Climate Policy, coordinating involvement all stakeholders and joint marketing of digital radio in The Netherlands. Jacqueline is owner of Jacky-B Entertainment Solutions, vice president and member of the Steering Board of WorldDAB and an active ambassador of digital radio throughout Europe. She is also a consultant of the Flemish Government, Department of Culture, Youth and Media on the introduction of DAB+ in Flanders. 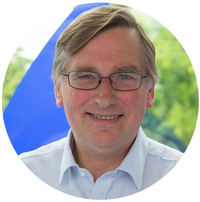 Graham Dixon is Head of Radio at the European Broadcasting Union in Geneva, having been Managing Editor of BBC Radio 3 until 2015.  Previously, he held several editorial and production positions within BBC Radio.  While at the BBC, he chaired the EBU Music Group and Euroradio Users Group.  His current role includes advocacy for public media, specifically for the positive role of radio within society; he is committed to encouraging radio innovation, as well as promoting distinctive content for all audiences.

After researching Italian Baroque music in both Italy and Germany, he was awarded a PhD from the University of Durham.  While working at the BBC, Graham responded to the changing media environment by studying for an MBA; this was awarded with distinction for his work on digital transformation, preparing radio production for the challenge of multiplatform delivery.  He is a Fellow of the Royal Society of Arts and the Royal Asiatic Society. 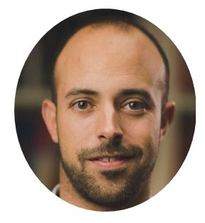 Dr. Jordi Joan Gimenez is Project Manager at the Institut für Rundfunktechnik (IRT). He is involved in several R&D projects in the domain of 5G for media distribution and AV production such as 5G-Xcast or 5G-Solutions. He is currently 3GPP delegate from IRT actively participating on the standardization of LTE/5G for broadcast distribution (commonly known as 5G Broadcast) and is also engaged in several project groups of the EBU Strategic Programme on Distribution. Jordi Joan has a wide experience on terrestrial broadcast technologies (DVB-T2/NGH, ATSC3.0 and DAB+), having acted as technical expert for the implementation of DTT in Colombia and contributed to several DVB and ATSC technical groups. He obtained a Ph.D. degree in Telecommunications by the Universitat Politècnica de València (UPV) in Spain, where he was a Research Engineer at the iTEAM Research Institute for more than seven years. 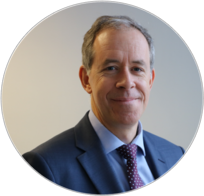 Patrick Hannon is Vice President Corporate Development at Frontier Silicon, the leading provider of technology solutions for digital radio. He was elected President of WorldDAB in November 2013. His role is to work with policymakers, regulators and industry players (including public and private broadcasters, network operators, device manufacturers, retailers and automotive manufacturers) to ensure that digital radio is successfully rolled out in as many territories as possible. Before joining Frontier Silicon, Patrick was a strategy consultant focused on broadcast and digital media. Previously, he held senior strategy and commercial roles at the BBC and BBC Worldwide. 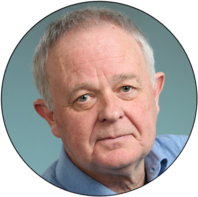 Jørn Jensen was President of WorldDMB 4 years from 2009-2013.Jørn has more than 30 years of experience in radio broadcasting. He has been working at Norway’s public broadcaster NRK from 1986, after a 10 years career as a musician. After starting by making radio programmes at NRK’s Radio Music department he became increasingly involved in programme production and development, and the creation of new digital stations. In 1995 he created NRK’s first DAB-only station, with 24 hour classical music. Since then, Jørn has been a Senior Advisor for different NRK departments and is currently Senior Advisor for the Director of Distribution, dealing with the strategy for NRK’s digital future on all NRK platforms.  Main focus in 2017 was FM shut-off, completed in December 2017. 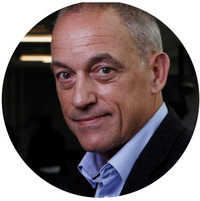 Simon has worked in the broadcast industry for 35 years in a range of roles, from radio content production to designing high power radio transmitter networks. For the last 20 years, he has been at Arqiva who run the majority of TV and Radio Broadcast Transmission Networks in the UK on behalf of their customers, and provide infrastructure for the mobile network operators. Simon holds a deep interest in how radio content can best be delivered to the end user, ensuring the consumer receives the best experience in terms of convenience, audio quality and availability. 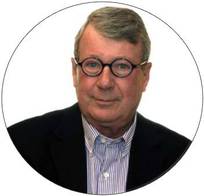 Michael McEwen is Director-General of the North American Broadcasters Association (NABA) and was former Secretary-General of the organization from 2001 to 2005. From 2006 to 2012 McEwen was a consultant advising on media; strategy, policy and broadcast digital technologies. McEwen is a former Chairman and Director of the UK based Media Asset Capital ltd. He is past President of Canadian Digital Television (CDTV) and past President of the World Digital Audio Broadcast (DAB) Forum. In addition, McEwen spent 27 years with the Canadian Broadcasting Corporation (CBC/Radio-Canada) including production and executive management roles. 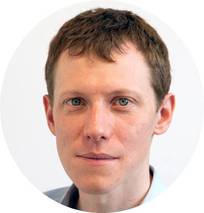 Andrew Murphy has worked at BBC Research and Development for over

18 years, joining the department directly after graduating from Cambridge University with a Masters degree in Engineering and Information Sciences. He has led the development of both hardware and software to support research in a number of fields and has worked within standardisation groups such as Digital Audio Broadcasting, Digital Radio Mondiale, Digital Video Broadcasting and 3GPP. He is currently leading BBC R&D’s work into mobile broadcasting and in particular the department’s work on eMBMS and 5G. 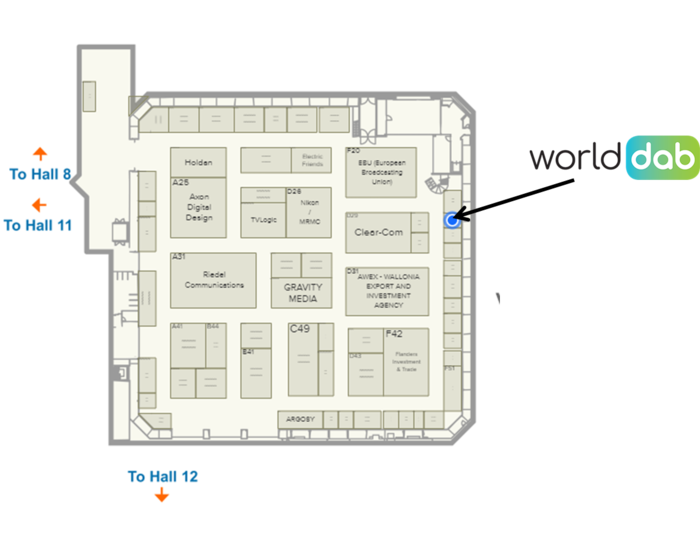 WorldDAB will host an information booth throughout IBC2019 – come and visit us to see the latest DAB+ digital radios for the home and in-car.  To celebrate digital radio we will be giving away a DAB+ radio everyday for 5 days, visit us at our booth to see how you can win.

Arrange a meeting with a member of the WorldDAB team here 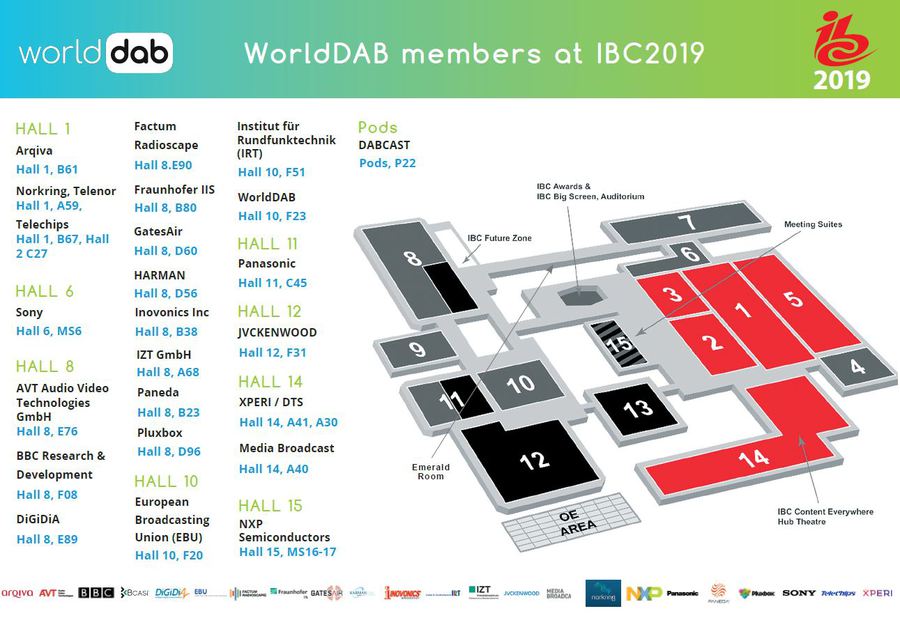